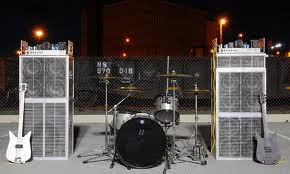 So was gonna tag this post under the "Now for something..." header but decided these guys are way tough enough to sneak in the hardcore back door! So these 3 guys are one of the most interesting outfits I've come across in a long time! Not Only do these guys play some of the best Shellac/Fugazi/Guitar noise inspired shit I've heard in a long time they are also part of a collective of highly innovative engineers (Check out their page on facebook here -> Obstructures ) they make speciality tools, wallets and the best thing they also make their own Guitars out of aluminium (see above pic, they also make them to order for customers, they use aluminium due to the tonal properties of the metal etc) I also believe some part of the collective is involved in architecture as well, if you like the music do your own digging cos they are a really interesting collective!
So the band... I came across their first collection of material "1999-2001" about 3 years ago on a blog site one day just randomly surfing for stuff I downloaded it and as soon  as I played it I was absolutely knocked on my ass and hooked there aren't that many reference points for the style they play, in the past I've said " if you are sick of the fact that there is just not enough Shellac material available then you should check these guys out!" I feel this is selling them a bit short tho as the Shellac comparison is definitely justified  they are definitely more agressive in their playing than Shellac but are definitely drawing on similar influences! And these guys sure can fucking play that's a certainty, the majority of their material is recorded with Bob Weston at Steve Albini's Electrical Audio Recordings Chicago so their recordings have a really great sound and the drums just sound awesome! So as you can see the Shellac connections just keep coming PLEASE DO NOT write them off as mere clones tho! I would recommend these to fans of Fugazi, Jon Spencer Blues Explosion, No Means No, Jesus Lizard, Slint that sorta stuff cos you will hear elements of all sorts of things within their sound!
Onto your Links the first thing you need to know is that instead of track titles NB use numbers so when you extract the files don't think I've been lazy it's meant to be like that! So heres what I've given you... "1999 - 2001" CD which collects their "A Diagram Without Scale Or Dimension" & "Structural Gymnastics" 12"'s plus one unreleased bonus track."2001 -2003" CD which collects their "Turbo Record" 7" "A Record Of American Fury" LP their side of the split 7" with Hit Self Destruct and 1 bonus unreleased track. The "Territorial Reconstruction" CDEP and "Actual Record" album I 've also added the "Brut Unison" compilation CD they did which contains 7 New Brutalism tracks and 5 Tracks each from Villa Brut, Beton Brut, and Soldat Brut all of these bands are part of the "Obstructures" collective I mentioned before and all the bands on the comp feature at least 2 of the 3 members of New Brutalism and to be honest there's not a great deal of difference in the sound of each band so it's a further 66 mins of New Brutalism & Related awesomeness! This stuff amounts to almost their complete works to date
It took me close to 2 years to track down the 5 CD's that are presented for you here (in glorious 320kbps quality of course!) and because of their relative obscurity and the fact i put a lot of time and money into collecting their material I was almost tempted to be all precious about it and not to upload anything and just direct you to their stuff and let you do you're own digging but these guys are one of my total favourite contemporary artists and they are just TOO good not to be sharing! However this is not the full story there is one further double album called "Personal Record" which they posted tracks from on their myspace page from that I spent many hours on the net trying to find it to no avail.... until New Brutalism set up a bandcamp page so if you read the below blurb you will see why i was unable to download it or buy it...

THIS MUSIC WAS WRITTEN, RECORDED AND PRESSED TO A ONE OFF DOUBLE LP IN AN ALUMINUM CASE FOR STABILE AND HIS BRIDE AS A GIFT IN THE YEAR 2009. PROCEEDS FROM THE SALE OF THESE DIGITAL FILES WILL HELP TO PAY FOR THE PRESSING OF A DOUBLE LP WHICH WILL BE MADE AVAILABLE TO ALL. IT WILL EITHER BE CALLED "IMPERSONAL RECORD" OR "APPETITE FOR APPETITE FOR DESTRUCTION" THOSE THAT PURCHASE THE FULL DOWNLOAD WILL RECEIVE HALF OFF THE DOUBLE LP WHEN IT IS RELEASED.

You can now buy it from their bandcamp page here... Personal Record for a mere $10 which is what i did and as i have a lot of respect for the music and the people involved I think since you're getting the majority of their stuff free here if you like the stuff I've put up here you should give them some support.
I know I'm violating my own blog rules here 1: by directing you to a "pay" download link and 2:Not giving it up for free here, but as you can see they are going to use the funds to make a vinyl version for the public (half price if you buy the download) so I really think they're not being greedy capitalists and have quite noble intentions which many bands who make you pay for their downloads most definitely do not! Anyway rant/waffle etc over These guys are fucking great go get them.....