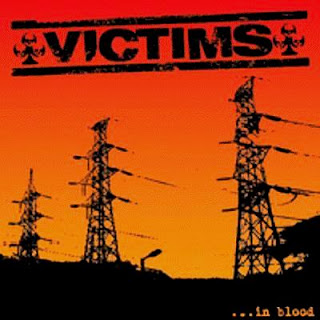 Ok so it isn't exactly rare this album but theres a good reason this is here and it's this.... I FUCKING LOVE THIS ALBUM! Joking aside this album is not easy to come by on CD you want the vinyl you will find a 100 people from a dozen sites glad to sell it to you but try finding it on CD it's a fucking nightmare! I've been a fan of Swedes Victims since I got their "Neverendinglasting" CD in 2000 they were by far one of the best bands doing "crust" at that time it was so fast and so fucking heavy and definitely giving the likes of Skit System and Wolpack the undisputed kings of fast & ripping Swedish crust punk at the time a SERIOUS run for their money.and all this from a 3 piece band as well! Anyway by the time "...In Blood"  came out I had joined a band who weren't crusty or punk in any way and becuase I was hearing and playing something different I started broadening my listening to loads of different stuff and having a rest from punk/ etc so they had kinda fell off my radar, so when they finally returned to mind years later I downloaded this album. Now, although a 30 second google search will easily net you a free download of this album I have tried several times to download it (probably about 10-20 different links) and i could not get one decent copy of it at all. All  i could get were either really poor 128 kbps files, vinyl rips or untagged messes or in a couple of cases completely wrongly tagged! So just last year after realising that these downloads were just shit, it was doing my head in that much i decided to just bite the fucking bullet and buy it! As i said it's not easy to come by on CD and when i finally found one for sale it ended up costing me about £12 including postage (not far off what you'd pay for a new cd somewhere like HMV) but it was so worth it, first time I put this in my CD player and played it i realised that even tho i already knew the album really well that the downloads I had listened to of it had really sucked the life out of the recording! This is one of THE most ferocious hardcore albums i've ever heard ranging from fast as fuck d-beat to powerful mid paced stuff theres no let up from the opening second to the ending chords it has thick heavy guitars pounding drums and seriously great ragged vocals and the production is amazing (It reminds me of the production sound of the early Swedish death metal stuff that was done at Sunlight studios without that specific Sunlight guitar sound that Entombed made famous) theres nothing really "new" here but Victims do it with a style and ferocity that just left a lot of the bands playing this style in the dirt! I've got all the Victims albums but this one was definitely their best in my mind although the others still have that ferocious heavy sound theres a lot more melody and a bit less pace in their later releases! So backing up to the beginning of my post... my reason for putting this not so rare but still utterly fucking ripping album up here? Simply so unlike me you don't have to put up with shit quality versions anymore or pay £12 for a CD I've ripped this from my CD and uploaded it at 320kbps so FINALLY there is one version on the net that has the quality to do this destroying album justice! (I noticed that when i put this album up that the file was 3 times the size of my original download so it's gotta be good). Download and wreck shit.....