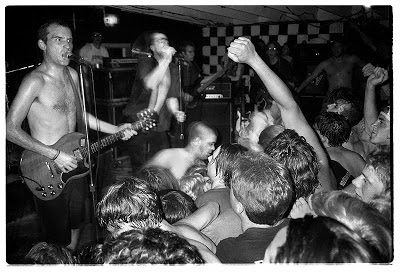 So another band that are very close to my heart and a music blog by me would not be complete without something by these guys! "But What?..." I hear you cry "We've all done the albums to death they are all over the net they even sell all their live gigs online so what could you possibly post that would interest us the typically jaded Fugazi fan eh Dave? ???" HA! well.... good question there isn't really much Fugazi that could be called Rare eh? but..... you may be surprised to hear this Fugazi having been a very self contained highly efficient well oiled machine  but before recording "In On The Killtaker" in Fugazi business as usual style they decided to try some outside production and who's services would they aquire for this awesome task but the mighty fucking collossus (at least musically speaking)  that is Steve Albini! Yep that's right folks according to the good ol' net in 1993 Fugazi recorded pretty much half of "In On The Killtaker" with Albini at the controls. Fugazi's reasons for not releasing the Albini version or pursuing the whole album with him are their own, tho I find it in one way a strange pairing and in another way a perfect one certainly in my mind the mix of those 2 elements is the musical equivalent of someones football dream team to me! So... when i heard about this I thought nah bogus internet bollocks but i actually managed to download the recording and it is definitely not the versions of these songs that were actually released on the album whether the below file is Fugazi recorded by Albini I've only got the internet's word for it and i'm sure some fucking Fugazi nerd will push his glasses up his nose and begin to shoot me down in flames with a "Actually i think you'll find...." but download it and judge for yourself it certainly sounds like Albini's hand in there to me and I'm a big fan of his work both musically and behind the mixing desk but what do I know? Judge for yourself.  And if that mighty file was not enough for you just to show you what a nice guy I am you will also find the one and only never officially released Fugazi John Peel Session from 1988 right underneath the Albini link! Go forth my friends and enjoy some prime quality Fugazi at their best!!
I'd like to add i was lucky enough to see Fugazi twice once in 87 in Glasgow and again in 2001 in Manchester The first time in 87 was probably one of the best gigs i have ever seen it was before "Repeater" and many songs off that were debuted but the highlight of the night was their version of  "Suggestion" during which they invited any women from the crowd to come up on the stage, take the mic and share their experiences and opinions on the subject matter of the song I watched this from the side of the stage and some of the horrific stories told combined with Fugazi's gentle improvisation behind them well i have to admit i had tears in my eyes! not many bands are as unique or truly special as Fugazi and we are definitely poorer in our culture for their absence.