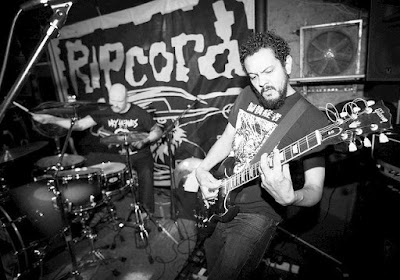 So I said in my post about the reebot that almost all the "extreme" music was gone, whilst about 99% of it just isn't for me anymore there is a 1% that is and I have left posts up of the things that for me are outstanding, this is one of them. So I decided it needed an update as well!

Endless Grinning Skulls come from an immaculate pedigree featuring Gords (Geriatric Unit, Hard To Swallow, John Holmes) Steve Charlesworth (Heresy, Geriatric Unit, Meatfly etc) Patrick Lawlor (War/System & Terrorain) and Andrew Morgan (Army Of Flying Robots & Dead In The Woods) these are some guys with a serious fucking grounding in the UK hardcore scene. I had never heard of Endless Grinning Skulls till a couple of months before I saw that they were playing the Leeds Means To End festival in September 2013 on the day I was going, so I sought out their music as soon as I found that out and then I found out who was in the band (I was a huge fan of Heresy back in the 80's I even wrote to all of them including Steve the drummer) and when saw their awesome artwork the urgency to hear them just increased TENFOLD! (However they ended up not playing due to a problem with their bassist)  So I wasn't sure what to expect as these guys have a real hardcore pedigree but yet they were playing a political/crust punk festival and their artwork had shades of Crass/crust to it and basically that kinda sums it up what you get is blisteringly fast crust punk riffs and drumming but with quite hardcore sounding vocals, instrument sounds and production, it really is a product of it's members as this is way too clean and well produced to be your typical gnarly heavy crust punk but yet at the same time the riffing is pure Discharge inspired punk with a hardcore sound! I originally managed to get in touch with one of the band members who kindly furnished me with a CD burn of the debut self titled album and their first EP "Fear Ignorance Control" but the story does not end there EGS are not the most prolific of bands they have very little internet presence no facebook etc but they do have a blogspot however it has not been updated in 7 years! To be honest I think this band really are guys who just do it as time and convenience allows or basically when they can be arsed. They don't seem to care about people hearing their band or even playing live very often! I was lucky enough to catch them live finally in 2014 and they were amazing Particularly drummer Steve who was playing fast sharp drums but looked like he was wondering if he had left the gas on or what he was gonna have for tea tomorrow simply effortless!

So FFWD to 2017 and we have some more activity, finally, after playing sporadic gigs over the 4 years since their last releases they hit us with a new album and 7" and this is where the music gets really interesting! The new 7" "Endless Grinning Spirits" contains 2 short tracks of fairly standard stuff straight up Discharge worship but retaining the clean hardcore sound this time round with maybe a little more grime on the production but still sounding exactly like you'd expect from EGS however new album "Risus Sardonicus" (Better known as Rictus Grin a spasming of the facial muscles which produces a smile that does not convey hapiness or pleasure, often associated with the dead) this was a different beast altogether. As the album begins firstly the tempo of the songs whilst still fast and in your face has been reigned in a little, however this has not sacrificed any of this bands intensity and actually lends more power to an already potent sound, but other than a little relaxing on the pace the production of the album is also stellar everything sounds sharp and clean and is equal in the mix the guitars slice, the bass bounces, the drums crack and cut through perfectly and the vocals are as per you'd expect....pissed off!  it is from track 7  things start to get a little different "Guilt Games" is a mid paced blazer of a track it has discordant riffs that are 100% out of the 80's Voivod soongbook but as the song builds pace the bass and guitars start to sound familiar and it's from this point on you notice that nearly the entire second half of the album is pretty much a tribute to Rudimentary Peni!( If you don't know who Rudimentary Peni are you can see my extensive post on them HERE) Next song "Septic Ascetics" starts off as a 100% take on Rudimentary Peni's "Rotten To The Core" The next track "Crutches" is more straight up EGS business as usual clocking in at under 2mins, however the next 2 tracks both return to that 100% Rudimentary Peni sound leaving us with album closer"End Times" clocking in at 5 & 1/2 minutes a mid paced scorcher this is just intensity personified, peppered with driving drums and rapid fire snare rolling it has an absolutely fantastic dynamic peaking and troughing often but yet never for one minute letting up on the intensity! It literally quickens your pulse and shortens your breath and makes your teeth grind!

SO since I did this post the band a put a few more bits up on their bandcamp page which is handy as I sorted all that whilst updating the post, onto your links. I have given you 2 links below even though the files are fairly small. SO PT. 1 contains their Self Titled Debut Taken from a 320 KBPS bandcamp download and also includes their Debut EP "Fear Ignorance Control" and their Split 7" With Violent Arrest that came with Artcore zine The EP is from a CD the band themselves sent me at 320 and the split 7" comes from I think a download it's 320 too. PT.2 contains the "Endless Grinning Spirit" 7" & "Risus Sardonicus" album both taken from 320 Bandcamp downloads plus their 2 tracks from Our Future Records comp "New Wave Of The Grave New Beat" Volume 2 ripped from my own CD which is 2 early rawer version of tracks from the "Risus..." album. These 2 links contain EVERYTHING they have done to date.

My main reason for updating this post is while EGS for me are still a brilliant HC band but as my interest in this kind of thing is waning a little I'm maybe not as big a fan of the first album and EP as I was when I first did this post, I still like them a lot but what I really wanted to share was the latest album "Risus Sardonicus" as you can read above it's an absolutely astounding listen and the fact it is so good makes me all the sadder that this band are so sporadically active cos I could listen to this album all day! It's not often that a band of this style comes along and utterly floors me especially these days but as you can see I have taken the time to update this post and give you fresh links I think that says that these are worth your time.


here's a link to their blogspot it is still there but hasn't been updated since 2013 but you can have a look at what's there if you are interested? 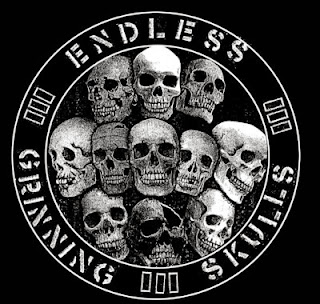