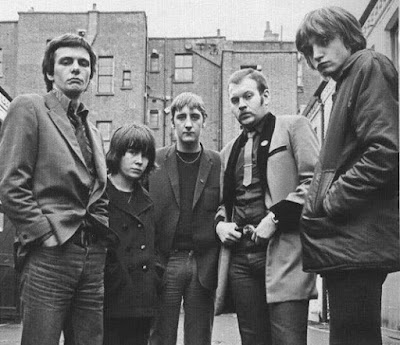 The Fall are a band I studiously ignored for decades. As you are probably aware I am a music obsessive, so, to start tackling a band like The Fall with 97 albums, 60 Singles & 51 compilations really is pretty much financial suicide for me! The worst part is each album has many different versions & "expansions" coupled with the fact that you have to go through lots of versions to find the best remaster and the one with the most extras, also,  they are not cheap!! Whilst I have dipped my toe in The Fall over the decades and I have really liked what I have heard, tackling their vast back catalogue just seemed insurmountable! That all changed recently! I had been listening to some Fall and really enjoying it and last month I had a bit of spare cash and decided maybe I should buy some I found someone who was selling The Fall 7 CD singles box set for £30, I was aghast, as the Fall have always been a "singles band" I figured it was as good a place to start as any with these guys, so I decided I would get that and maybe their first lot of albums.Whilst searching for some bargains I also found that they had released a box set called "1982" this 6 CD set basically covers everything they done in that year and as it was a handier way of wiping out 6 separate purchases so I got that too!

This brings us to this post, I had downloaded The Singles box set when it came out in 2017 and I remember at the time there was a lot of complaint about how it was arranged (3 discs of all the A sides and 4 Discs of the B Sides rather than have the complete singles in chronological order) not only that when the CD came along as the dominant format The Fall  often released CD "sets" with multiple B-Sides and on this box set they only give one or in some cases 2 of the B sides for each single!

FFWD to a couple of weeks ago, I am in a group on Facebook called "Now Playing" where you post up a picture of what you are listening to and talk about it! I posted The Fall singles Box and one member commented that he hated the way it was arranged and that he was "gonna rip my CD's one Day and put it in the right order" WELLLL as you can imagine this sent a huge spotlight (not a light bulb a SPOTLIGHT) off above my head, I decided that not only was I gonna take my freshly ripped CD's and put the singles chronologically A & B-Sides together I was gonna insert ALL the missing B-sides and make this a TRUE "Complete Singles" set. I set about doing this and it took me about 10 hours over 2 days to do it, I had no intention of doing a Fall post here but I decided I'd put so much work into this I should upload it for the world!

So firstly, here, the box set has been expanded from it's original 121 tracks to a whopping 155 tracks! And, as  this is my personal version of the "Complete Singles" each single has been put in proper chronological order (I researched the dates each single was released and arranged them accordingly ...Yeah I'm that much of a fucking NERD!) with it's A side then B sides rather than split them up into "all the A-sides" and "All The B-Sides"! I also where possible put the tracks in the order they were on their original release even if it meant there were 2 versions of the same track together!

Now I am not gonna claim this to be 100% complete as the original boxset contained one track each from the A & B sides of later EP's "The Remainderer" and "Wise Ol' Man" however I decided as these are not truly singles and are actually more like mini LP's (both running at around 20-30 minutes in length) that I would ommit them from this set as I would have had to add a 9th part just for those.
I have sourced the missing B-sides from remastered and expanded Fall albums so there is no loss in quality and no vinyl rips, the sound should be and is to my ears consistent throughout.

I decided that giving you The Fall Singles set wasn't nearly enough, Hell no! Let's go back to the "1982" box set! The Fall were fairly productive in 1982 doing 2 albums, a single, a Peel session and a tour of Australia and New Zealand! Label Cherry Red Records are in the process of releasing "The Fall Sound Series" they claim this series as the definitive remasters and expansions of The Fall back catalogue and they decided to cover the whole year in one mighty 6 Disc box set! So in the Box you get the albums "Hex Induction Hour" "Room To Live" plus the compilation "Singles, Sessions, Soundchecks, Live" (containing their 1982 Peel Session and the 1982 Kamera 7" plus some Live tracks and the soundcheck for the Australian Gig That Was Released as "Fall In A Hole" this comp is exclusive to the boxset) Also included are the live Albums "Fall In A Hole" & "Fall In A Hole Plus" and a further Live set from the same tour "Live To Air Melbourne '82" so altogether you get 72 tracks of prime era Fall all remastered for this set!

Onto your files... I don't think there is any point in me discussing the music of The Fall I don't think that anyone whose come to this post is going to be new to them you probably came to this from a search for it, but if you don't know The Fall this is a good place to start as the singles box covers their entire career from their first 7" release in 1978 to the last in 2016 and will give you a damn good idea what they are like. So the files These are pretty big downloads I decided, as I have the storage space and no restrictions on uploads, why upload 14 links? So I have put them together in parts. Each of the parts of the single box contains 2 folders of approx 80 or more minutes in length and I chose to put 2 Discs each from the "1982" set in each part below to save time for me and the box set was too big to just upload in one file.

So there you go a labour intensive exhaustive "Complete" Fall Singles collection and the bonus of the expensive 1982 box set all ripped from my own CD's and sourced from remastered versions so... Go get yourself TOTALLY WIRED with some classic FALL!