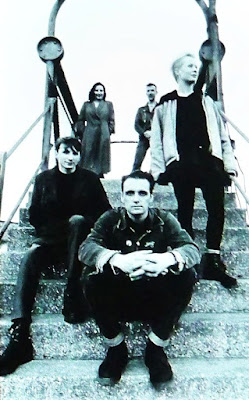 Back in the 80's and early 90's when hardcore ruled the underground in the UK there was a small scene that ran parallel to it and often crossed over with it, for the sake of ease I'm gonna call this music "guitar noise" think of  bands like Head Of David (See post HERE ) and Loop (See Post HERE ) and many more, there were many famous venues such as ,The Mermaid in Birmingham and Planet X in Liverpool who would put on large mixed bills (the kind of thing that would have "Fest" attached to it now, but back then it was just a normal thing) and it wouldn't be unusual to see what you'd think of as a "weird" mix of bands on these bills from crust and grindcore to punk and often these type of guitar noise bands as well (For example Liverpool band Walkingseeds who I will do a post on soon often appeared on these type of bills at Planet X). Whilst these bands bore little resemblance to the hardcore bands on the bill back then thinking was not so rigidly divided by genre and it wouldn't be jarring to have Head Of David on the same bill as Extreme Noise Terror in fact the first time I saw Godflesh they were on tour with Napalm Death in 1988 so you had one of the worlds slowest bands playing with the worlds fastest! There were some great bands that emerged from this "guitar noise" scene, some long forgotten, some have become more well known and influential, with the availability of the internet people are discovering this groundbreaking music with ease. One such band that seems largely forgotten is this band A.C. Temple.I had completely forgotten about them myself until for some reason recently the name popped up and I remembered them being around at the time and that, despite trying, I couldn't get my hands on their records, luckily. as i say their albums are easily available used on CD.

Despite the fact that A.C. Temple did a mini album and 3 great albums on Various Mute related labels (Furthur & Blast First) particularly with the latter (Blat First) being the absolute bastion of acidic guitar noise. Unleashing such bands as Sonic Youth & Big Black on the UK, it seems A.C. Temple remain largely a curiosity of the time, all of their albums are out of print and hardly anyone seems to know much about them.

I know very little about A.C. Temple's history so I decided to take the easy way out here as I have a lot of posts to get through for you so here's what the holy temple of discogs.com has to say about them....

"Formed in Sheffield in 1985, A.C. Temple were a powerful UK counterpart to the abrasive experimental guitar bands coming out of the USA around the same time.

Early vocalist Giles soon took a back seat to Bromley but remained a co-lyricist to the band throughout their career. However, it was the classic line-up of Bromley, Kilbride, Woodward, Hartley and Waterfall who recorded their seminal 'Blowtorch' LP and a session for John Peel on Radio 1 in 1987. Critics made favourable comparisons to Sonic Youth and Big Black (Kilbride, in fact, had acted as Big Black's driver for their final UK tour and is one of the named recipient's on Shellac's 'Futurist' LP) but the swirling intertwined guitars and extreme down-tuned bass, combined with Bromley's sonorous vocals and Waterfall's thunderous drumming, were distinctively theirs.

Subsequent line-up changes saw Chris Trout (from Kilgore Trout) join and more melody and light enter their songs, culminating in the ethereal LP 'Belinda Backwards', before they split in 1993 (leaving some new songs sadly unrecorded), under-appreciated and under the radar to the end"

That pretty much sums it up and covers what I was saying "under-appreciated and under the radar to the end" Though i can understand the Big Black/Sonic Youth comparisons I feel that while yes they definitely fitted into that mould that they had something of their own there and also there was little to compare this band to at the time as this music was new for example I remember Godflesh being pitched to me as a cross between Big Black & SWANS well yeah I definitely see SWANS but Big Black? why because they use a drum machine? As i say reference points were thin on the ground then!

So onto your links what you have here is the released discography by this band there are a few unreleased things I'd love to get my hands on such as their John Peel Session and the aborted Steve Albini recordings for their debut album "Blowtorch" (you can find some of those on youtube at the Camel Channel HERE this youtube channel is run by ex - A.C. Temple member Chris Trout and contains many interesting bits and bobs) So here's what you get

Their 1986 demo - I found this at the excellent Sheffield Tape Archive on Bandcamp (HERE) they document many lost and unknown Sheffield bands recordings as well as many decent quality live recordings of bands that have played in Sheffield and is well worth a few minutes of your time to have a browse. This is very good quality for an unearthed demo from over 3 decades ago and has a couple of primitive versions of songs that would be reworked for subsequent albums. It's raw and noisy but definitely shows you this band had their sound nailed!

Songs Of Praise - This was originally their debut mini LP but was added as bonus tracks to the CD of their debut album "Blowtorch" I decided to separate it and give you it on it's own with the correct cover art etc as being their vinyl debut it's too important to be tucked away as bonus tracks. I remember this causing a stir in the music papers and getting some pretty decent reviews I had only recently discovered bands like Big Black & Sonic Youth as well as the likes of Head Of David and Loop so anything in that mould would definitely attract my attention! This is a great debut thundering drums deep bass topped with all sorts or chiming and thrashing noisy guitar it also contains some great use of that crazy slide guitar technique that Jesus Lizard would use to great effect later! top this with some great dual male and female vocals and it's definitely a potent listen! The guitar is definitely at the forefront of the sound and there's swirling riffs ala' My Bloody Valentine and plenty of scratchy guitar that reminds me of bands like The Fall and The Wedding present though way more out of control!

Blowtorch - Takes the sound of Songs Of Praise and refines it and maybe smooths off the rough edges a little and i can definitely feel a more Sonic Youth influence here while the guitars still bite and scratch and the vocals are still edgy there's a definite progression here and whilst far more noisy and out there there's a lot of sounds that would later form the basis of a lot of the indie rock of the 00's! Also the production is way smoother I would actually prefer they had released the noisier Steve Albini version of the album (see link above to youtube) but this is still a cracking listen and definitely gives me that teeth gritted nodding my head thing!

Sourpuss - 4 years into their existence and the band are definitely progressing this album smooths the edges out further and the Sonic Youth and now Dinosaur Jr. influence is definitely showing, with Kate Bromley's vocals (which are most definitely heavily influenced by Kim Gordon) are taking the lead and the band are definitely leaning more towards the sound of the music coming out of the US underground at the time like some of the things SST & Homestead records amongst others were releasing also bands like Fugazi, whilst that American influence is definitely felt they have a very British take on it and are still holding their own here the sound is bombastic the songs have a spark and energy that just leaps from the speakers where i found the American bands to be more introspective there's almost a dark "joy" to the songs on this album.It's still chock full of dissonant guitar and thundering drums it's just a less "grimy" take on it than it's predecessors.

Belinda Backwards - This is their 3rd and final album from 1991 this is probably my least favourite of theirs whilst it's still a pretty decent album again the influences I mention on "Sourpuss" are very prevalent but that bombastic "Dark Joy" I mentioned seems to be missing, whilst the songs aren't in themselves what you call slow they seem to lack the energy and dynamic of the previous album and overall the sound is far more accessible, in places reminding me of the Pixies. Again whilst the influences are overwhelmingly American you couldn't listen to this band and not know they were British if you are versed in the music scene of that time. I'm maybe being a bit unfair to this album as I'm listening to it now as I type this and it's certainly a great album but as I said it just seems a bit tamer than it's predecessors with some almost sorta jaunty/jangly touches whether that's a better thing or not you can decide.

So that's it not quite a lost band but certainly a (sadly) forgotten band there wasn't a great deal of bands in the UK at the time coming up with sounds that were as good as their American counterparts it's just unfortunate that they suffered from that aloof elitism that because they were not American then they were "not as good" I call bullshit on that, these guys are every inch the equal of the sounds they were influenced by and definitely worth your time to check out if you like any of the bands I have mentioned or if you are just curious! A.C. Temple, a great band defeated by geography!