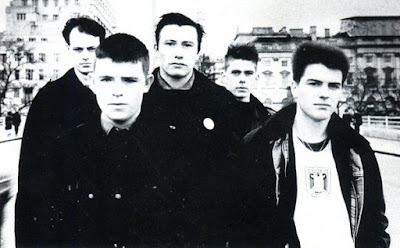 Lack Of Knowledge are a bit of an anomaly, I have been listening to a lot of what is called "Post Punk" type music for quite a few years and also having been a long standing fan of anarcho punk music I had done a lot of downloading of that early 80's era music centred mostly around Crass & their Crass Records imprint however some of the things I had downloaded didn't fall into that specific "anarcho" sound I loved, bands such as The Mob, Part 1 , Vex, etc they didn't really fit into that rage and bile sound and they were consigned to a folder and forgotten. However with my interest in the post punk sound I started seeing a few ties to the anarcho scene and decided to revisit some of them and this is where Lack Of Knowledge come in.
Formed around 1980 Lack Of Knowledge self released their first single "The Uninvited / Ritual" in 1982 Following that they forged an alliance with Crass records releasing their amazing "Grey" EP packaged in a trademark 6 panel fold out sleeve and bearing the standard Graphic appearance of the Crass records EP's you'd be forgiven for thinking that you were getting some serious punk rock but that is definitely not the case.... 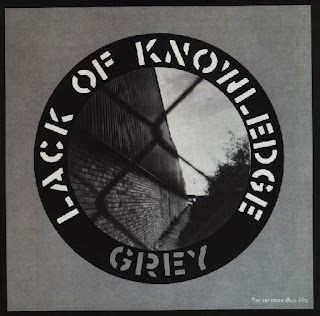 Whilst there certainly is a ton of energy to this band they have a sound more akin to post punk contemporaries of the time such as Joy Division whom they obviously owe quite a debt to for their sound, whilst the lyrics are overtly political that is pretty much where the connection to the more traditional punk ends! The sound is very melodic but with a slightly darker edge also the songs are well written and have a scratchy kinda melody that makes the songs both memorable and a pleasure to listen to.

It staggers me that Lack Of Knowledge landing at the exact time when this sort of music was at the height of it's popularity that they didn't garner a larger following as at the time post punk was very much en vogue and these guys play the style with absolute conviction. I can't help but think that their association with Crass Records may have held them back somewhat or maybe it was their blatant Joy Division influence that hampered them more than helped? I don't know of many people outside of the punk scene that have actually heard of them in fact when I recently shared a song on social media only one of my more astute friends of a similar age, himself entrenched in punk had actually heard of them and was a fan! Another thing that mystifies me is why go with Crass Records (Their later stunning debut album "Sirens Are Back" was released on Crass records offshoot Corpus Christi Records) I personally feel that being packaged like and released by a notoriously political label whose releases were hugely popular with the "hardcore" punk crowd then maybe they were "guilty by association" I can imagine the lack of raging guitars shouted vocals and "Fuck the System" lyrics would have had most Crass Records fans chucking this on their pile and never listening to it again! (Which is exactly what I did sort of! Though I DID listen again).

Whilst as I have already said Lack Of Knowledge are very heavily and very obviously influenced by Joy Division The baritone vocals the drumming style the playing the bass high while the guitars ring and chime these things were also pretty much all the trademarks of the post punk sound and Lack Of Knowledge have a lot more to offer than mere cloning.They add elements to the sound that are what I can I guess describe as heavier maybe denser? the songs are melodic with plenty of hooks and great vocal lines whilst delivering astutely political lyrics and there are some nice subtle touches of keyboard that help drive the songs dynamics. All in all Lack of Knowledge have become one of my favourite listens over the last year or so which is why I decided to give them a space here in the hope this will land with you guys too.

Almost all of Lack of Knowledge's output was compiled over 2 CD compilations The "Grey" EP and debut album "Sirens Are Back" being released as the "Grey" CD and a further compilation "Americanized" compiles Their Debut Single "Uninvited/Ritual" and "Sentinel" 12" along with a further 19 tracks, 6 demos/unreleased tracks from 1978 - 1984 and a staggering 13 new recordings from 2000 I can find no information as to what these are an attempt at a comeback an aborted album? who knows however they seem to spark with a more punky energy and less of the doomy Joy Division sound of their earlier material. the only thing missing from these CD's is the "White Science" EP which was released in 2004 however this sounds like an early demo having a far scratchier, faster and intense sound and far more akin to the sound of anarcho punk at the time rather than the better produced and more mature sounding music released later I have added it in here for completions sake.

So below you will find the discography of this great band split over 2 parts I have broken both compilation Cd's into their individual parts as listening to the CD's at home as a whole is fine but I feel digitally you should see the individual covers and be able to listen to the separate parts as they were released. Part 1 contains the "Grey" EP & "Sirens are Back" LP. Part 2 contains the "Amercanized" CD Which I split into the 7" & 12" and compiled the remaining studio tracks into chronological order the demos & Unreleased tracks and the session from 2000 separately

I can't recommend this band highly enough I truly feel they have been overlooked and forgotten and it's a real shame because they really deserve more of an audience and the music has aged surprisingly well in both production and sound.