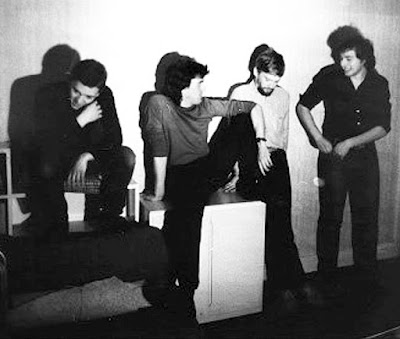 Crispy Ambulance were an early Factory Records band and it is a name I have heard many times and completely ignored due to, thinking "How can I possibly take a band seriously with a name like that?!!" Whenever the name has come up in the plethora of Factory records and related books I have read I have not really given them my attention! However I recently got sick of certain bands coming up in things I was reading in relation to other artists I like, one of those was Crispy Ambulance (Another was Section 25 see post HERE) I decided to do a bit of investigation into them despite my reservations about the name, so first a little bit of history...

The band played their first gig on 1 January 1978 at the Spurley Hey Youth Centre.Following a self-released debut single, "From the Cradle to the Grave" (1980), the band joined Factory Records. Singles "Unsightly and Serene" and "Live on a Hot August Night" (produced by Martin Hannett) preceded their album The Plateau Phase and final single "Sexus". The Plateau Phase was given a five star review by Sounds In April 1980 singer Alan Hempsall also appeared on stage with Joy Division at Derby Hall, standing in for Ian Curtis who had suffered an epileptic fit, a performance which ultimately descended into a riot. This scene is depicted in the Joy Division biopic Control. During 1981–1982, Crispy Ambulance played several dozen live dates in the UK, as well as a short European tour with Section 25. They also recorded a session for John Peel's BBC Radio 1 show in January 1981. Crispy Ambulance disbanded in late 1982, leaving behind Fin, a live album of late period songs. A further posthumous album, Frozen Blood, included their 1981 BBC radio session for the John Peel programme.
In the commentary for the 2002 film, 24 Hour Party People, Tony Wilson of Factory Records stated that while he liked the band, he felt that their name was the worst band name of all time.

So there you go I'm not the only one with reservations about the name! I have taken most of the above paragraph from wikipedia as I don't know a great deal of history of the band as I am a fairly recent convert however you will note this post is called "Crispy Ambulance - Essentials" this is because I am going to deal with the bands original era from 1980 - 1982 as they reformed in 1999 and have actually released more material since reforming, than they did in their original incarnation however whilst good it does not have the same sound as the original releases and in a lot of cases is instrumental.

So enough blurb here's what you get in your files, Now I feel it was quite sneaky the way the 3 Albums "Plateau Phase", "Frozen Blood" & "Fin" that I present to you here were reissued, whilst for my money I would have compiled all the non album studio material on one disc the reissuers have chosen to spread it over the 3 CD's and in one case on a much later release from 2015! So all shall become clear at the moment as OCDave has sorted it all out neatly for you!

Your first file is Plateau Phase (Expanded), In 2015 Crispy Ambulance recorded an album of unreleased songs from their early days called "Compulsion" but also included on this album were 2 outtakes from the Plateau Phase album session from 1982 "WMTP 2" & "Rain Without Clouds" I have added these to the end of the album in this file giving you the complete session

Second File is Frozen Blood (Redux) "Frozen Blood" was a compilation of  Live Tracks their John Peel & Piccadilly Radio Session & some single tracks however the rest of the bands singles were split up over "The Plateau Phase" CD and "Fin" Live CD so what I did was took the Live Tracks out from "Frozen Blood" then I stripped the single tracks from the other 2 CD's and rearranged it all in chronological order and therefore you have Frozen Blood (Redux) I feel it works better that way and gives a better overview of the bands non album studio output. This is all tagged correctly and I have put in brackets after each song title where the song is from

Third File is "Fin" This was a 12 Track live compilation taken from Various concerts up to 1982 I have expanded this by adding the live tracks from "Frozen Blood" as stated above taking "Fin" from it's original 10 tracks and expanding it to 18 tracks.I have put in brackets after each track the concert and date it was taken from.

Please also note that ALL of the material presented here has been remastered for these reissues and ripped directly from my own CD's so it's very good quality.

So if all of the above has not confused you too much then you will find this is, at least as far as released material is concerned the complete early works of this essential band it took me a few CD purchases and a lot of work to arrange them how I have but what's good about that is these versions are entirely unique to this blog you may find these albums elsewhere but not in the way I have presented them here.

I feel Crispy Ambulance whilst having a following at the time didn't really take off as much as some of their Factory records contemporaries and have remained an obscurity, they play a style whilst rooted in the Post Punk movement of the time remains all of their own blending jangling guitar lines with deep bass and keyboard textures along with unique vocals to make a sound that is all encompassing and just envelops the listener as it evokes mood and atmosphere.So I am giving you a chance to check out a fantastic band with all their recordings from the early 80's in one place I strongly urge you to give this band a chance as they would not be here if they weren't of extremely high quality.