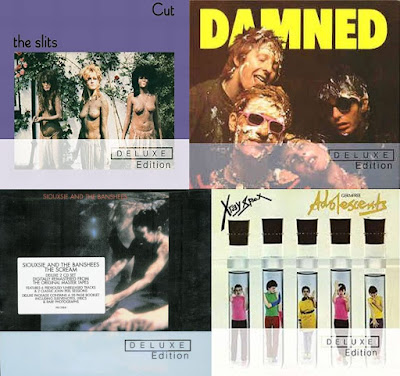 I am an absolute sucker for a remastered or expanded reissue. I have bought albums I already own a second time (or in rare cases a third) because there is a new remaster, however over the last decade or so there has been a trend towards a new package there is nothing that sends me into a bigger frenzy reaching for the "Buy It Now" button than the words "Deluxe Edition"

It seems a bit of a strange concept that bands from the original era of Punk Rock should get this expanded "Deluxe Edition" treatment, for all of punk's pretensions of rebellion and anti-state views wellll 3 of the 4 albums I present here were originally, and these editions are, on major labels!
Deluxe Editions, when they first appeared seemed to be the domain of old fart bands that nobody with any decent taste would give a shit about! However as the idea expanded to more and more great albums  I for one have adopted it wholeheartedly and now own an absolute shitload of these bloody things. In a lot of cases it's a simple cash in where you get a disc of live recordings as your bonus, but sometimes and  particularly in the case of these 4 albums, it is a good idea, as sometimes they are albums in sore need of remastering plus, with the additional discs you often get all the non album b-sides, Peel sessions etc rounding up a whole era of a band and for me, it's a lot better buying all of this in one fell swoop than tracking down that one compilation with the great b-side on it!

So onto your links, I am not gonna go into a history of each band here because I am assuming you would know these bands but if not I added a link you to a biography for each band you can read up on them if you choose. All files ripped from my own CD's at 320KBPS.

The Damned were one of the first and earliest exponents of "Punk" being credited with releasing the first "punk" record in the UK This their debut album here, expanded to a mighty 3 discs, for me, has less in common with The Pistols or The Clash and more of a sound of the earlier pre-punk bands like some of the harder end of the "Nuggets" compilations and the garage rock of MC5 and The Stooges as you can see by their cover of The Stooges "Not Right" closing the album. The 2 bonus discs contain all the non album singles and b-sides, a brace of demos , their first 2 John Peel Sessions and some live tracks, the third disc contains a full live set from London's infamous 100 Club from 1976 All remastered for this set.

Siouxsie & The Banshees were a band I have never had any interest in because firstly I'd always seen them as goth fodder (which in later years I think is fair) and also I always thought of them as wannabees. Formed out of the famous "Bromley Contingent" the first gang of punks around the Pistols in London and seemed to be more like coat tail chasers rather than innovators. That all changed when I finally had a listen to this, their debut album.Whilst not only being a memorable listen it creates a great urgency in it's sound whilst retaining an atmosphere and some more serious post punk sensibility, having more in common with some of the early female fronted American punk bands like X and Avengers to my ears. Here the Album is remastered with a bonus disc containing a load of demo's, both early Peel Sessions and a couple of non album A-sides.

Now we start to get to more traditional 70's era punk X-Ray Spex were a great and original band fronted by the inimitable Pol Styrene, but they definitely had that more "evolved out of pub rock" sound that was pretty much the punk template in the mid 70's save for having a saxophone player in the band which I suppose in one way separated them from their peers and was a pretty radical idea for a punk band.! This time the album has been seriously expanded for this edition the first disc contains the album plus both their Peel sessions plus non album singles and b-sides whilst the second disc contains their entire pre-signing demos (14 Tracks) plus a couple of rough mixes and a couple of Backing tracks.

Whilst predating what would later be called "post punk" by a good 2 or 3 years I would say The Slits kinda fall into that category by the time of "Cut" their early demos and recordings which had way more youthful traditional punk ferocity than this album were long behind them, they had developed from "first all girl punk band" into something else entirely, they had matured! The Slits influences had also changed as well as being heavily influenced by Dub and more experimental sounds something that is clearly apparent when you hear some of the sparsity and space used in the sound of this album but also working with famous reggae producer Dennis Bovell on the album added that spacey feel of dub in a lot of the music despite it's obvious intensity! Not that there aren't great uptempo punk songs here take the blistering "Shoplifting" for one example and Ariana's vocals are just unhinged!
Here the album has been remastered and expanded containing the album plus the single B-sides on here (though not unfortunately the "Animal Space"  or "Man Next Door" singles released independently and unavailable anywhere except on an extremely rare Japanese unofficial CD release of their Y records Bootleg retrospective ) The second disc contains no less than 20 Demos, Rough mixes, Alternate versions & Dubs, Altogether this is a definitive look at The Slits music. Also note this collection is completely deleted due to an ongoing dispute over the rights to their material it is unlikely to ever be reissued in this format again.

So here you have it 4 fancy expanded Deluxe Editions of 4 important 70's punk rock albums whilst aside from The Slitsa none of these are particularly rare they are all no longer in print and becoming harder to find, plus as these document an entire era of these bands respective histories I thought I'd post them here for the curious and the hardcore fans.