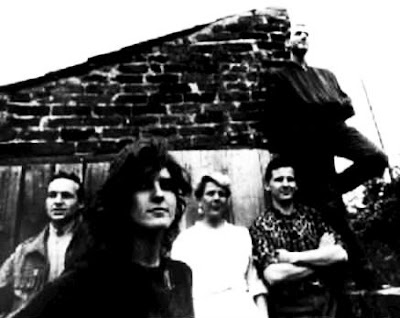 Manchester's Factory Records has long been an interest of mine basically for 2 reasons when I first moved to England in the mid 90's I lived in Manchester for 5 years. I absolutely loved the city and it's a place very close to my heart and secondly because I am a huge Joy Division fan, it had always held a fascination for me as it was during the years of "Post Punk" that bands were truly innovating and inventing new sounds from the stale 3 chord pub rock on steroids template of the original punk sound. However aside from Joy Division I had never really considered any of the other Factory bands worth checking out I had this idea in my head that the names and the music released by Factory in particular New Order who I have never been able to get into, were basically too commercial or just not going to be of interest to me! It was upon reading I think the 5th book I had read on Factory records related things that I decided I have the internet what harm is there in checking out some of the other early Factory bands? When i finally sat down at the computer to do this I started wanting to punch myself in the face! Between around 1981 and 1984 there was some utterly amazing stuff released by factory (also some total GUFF!) and some of these rapidly became an obsession for me to the point I bought albums beyond this period that cost me dearly and turned out to be well pretty disappointing and terrible!

So one band I discovered was Crispy Ambulance (see Post HERE) Another was Section 25. Named after a Section of the Mental Health act I have no idea that with a fairly dark name and coming from the particular era I love that I ignored them for so long! You'd think I'd learn about prejudicing music by now right?  I downloaded Section 25's debut " Always Now" and by 3 songs in I was on Ebay buying the fancy double CD reissue within about a week I had bought almost everything I present to you here, I say this not to brag but to illustrate how much of an impact it had on me I had been looking for bands with that sound and Section 25 pretty much hit that nail square on the head!

Joy Division seemed to be a catalyst for the Manchester scene and beyond, their influence lies heavy over the early Factory records roster, not that any of the bands are merely cloning but you can certainly feel that influence of dark, moody atmosphere. Section 25 are no exception, their debut album "Always Now" is an atmospheric ride through dark urban spaces the music is sparse but still manages to evoke a feeling of discomfort. Not that it's not enjoyable I absolutely love this album but it is a very dense, claustrophobic listen in places but then so were Joy Division and they went on to be one of the most popular bands in the world! Don't get me wrong this is a great album and here expanded with all the singles B-sides a John Peel Session session outtakes and a live set it's an absolutely fantastic set! The dark and moody theme continues with second album "In the Key Of Dreams" in fact if possible it seems this album is even more moody than it's predecessor you can hear more electronics sneaking into the sound here with the use of some programmed beats and more synths but it's actually a very minimal stripped down sound this time still very much in the post punk camp but taking the sound to a quieter place. less brash guitars, more darkened rooms and almost whispered vocal at times. I do like this album but it doesn't have the same impact for me as it's predecessor I have listened to it a few times but I find you definitely have to be in the right mood for it, here it is expanded with "The Beast" 12" and bonus track "Hold On"

Lastly we come to probably their most well known album well if not it contains their most popular song ("Looking From A Hilltop") 1984's "From The Hip" is a VAST progression from it's predecessors, whilst still evoking an atmosphere this is a complete change of style. Here the moody darkness has been substituted for a lighter touch there is almost no live instruments on this album it's beats appear to be entirely programmed and the music created by processing and keyboards/synths also there are now some gorgeous female vocals provided by Angela Cassidy which was also a big shock to me I hadn't really expected when buying these albums for the band to have come so far in a year. Legend has it that the rise of The Hacienda club, at the time the heart of the Manchester and Factory scene, had been a huge influence on every band involved with factory (New Order are a perfect example) the infectious dance, funk and electro beats being played in the club had hugely influenced Section 25 resulting in this first foray into more dance orientated sounds! This is a great album, though, as I had been hoping for more of the moody post punk of their first 2 albums I was actually very disappointed and at first I shelved it and was pretty gutted about my purchase as it was quite expensive, but, for me at least, persistence was key. Determined to get my moneys worth I continued to listen and I began to realise what a great album it is, Although the sound is quite dated now reminiscent of the synth pop of the era there's a melancholy sorta underground edge to it. I am old enough to remember when this was cutting edge music so to my ears it's a beautifully crafted electronic album with some great catchy beats and warm pulsating synths that still manage to evoke an atmosphere but here the dark dread like feeling has been replaced by something altogether more wistful! I have given you the 30th anniversary expanded 2 disc edition which includes a\ll the relevant singles and mixes released at the time a BBC session plus a brace of album demos bonus tracks and a couple of more contemporary remixes one by Stephen Morris of new Order from 2010

lastly we come to "Illminus Illumina" this is a little confusing as between their first and second album Section 25 released a cassette of this title however in 2001 LTM released a 2 CD compilation one disc featuring bands from their label packaged with a second disc which was a Section 25 compilation with the same title but a different tracklist from the 1981 cassette this contains what appears to be an entire demo from 1981 recorded at SSRU Studio coupled with 7 live tracks from 1979 - 1982. It's actually a pretty good listen considering it's near 40 year vintage and shows a great glimpse of the bands early work (Please note everything here is ripped from my own CD's at 320 KBPS except for this I have not been able to find a CD yet but it's at VBR and is really good quality)

So I kinda waffled a bit here but I hope you get the idea, I really like this band and they are one of the better ones from this era i have discovered from my deep dive into the early post-punk scene if you're already a fan then help yourself to these expanded editions if not have a listen if what I've said strikes a chord?

THE KEY OF DREAMS - Mediafire