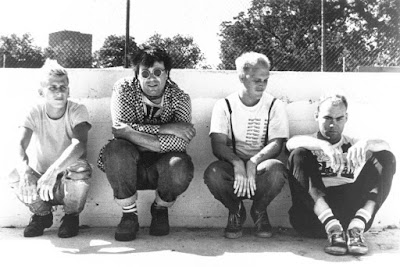 So despite shitcanning most of the hardcore/punk/blahhhh from this blog for the "reboot" I still love my classic era USHC. I think the Americans in the 80's had an unusual take on punk it didn't have that same regimented look and feel of it's UK counterpart these were guys in sneakers and jeans, flannel and t-shirts there wasn't so much of a uniform feel to the music or look and it's something that appeals to me more than the leather Spikes and flamboyant hair of UK punk of the era (not that i don't love UK Punk I just prefer the US stuff). I was a chubby kid and the whole leather and spikes thing wasn't for me nor was the spiky hair but I could rock the shit out of a flannel shirt (Still do to this day!)

So one of the best bands around in the 80's were  Big Boys out of Texas.these guys were pretty unique in their sound whilst they could easily write a raging punk tune they took their cues from the Minutemen, funk and the angular sounds of early 80's UK bands like Wire and Gang of Four and blended it together into one fantastic sound! Whilst a lot of bands ran with the distorted guitar thrash Big Boys leaned towards a more clean, tense sound with highly tuned guitar and clean bass and one other thing DAMN Big Boys could play. Featuring Rey Washam who went on to play in Jesus Lizard and Rapeman, the immense talents of Tim Kerr & Chris Gates both of whom played both guitar and bass (though not at the same time) and fronted by the imposing and flamboyant front man Randy "Biscuit" Turner they were a force to be reckoned with and definitely were a huge influence on the funk metal scene that came along in the later 80's (Red Hot Chili Peppers once supported Big Boys and look at them now!)

There's a lot I could say about Big Boys I've been a fan for a long time but as I have been doing of late I am gonna give it over to the internet for the facts so here's a blurb from wikipedia....

"Based in Austin, Texas the band members were Randy "Biscuit" Turner on vocals, Tim Kerr on guitar and Chris Gates on bass. The key members of the band were childhood friends for a decade before the band was started.[1] Over the years the group played with five drummers in all; Steve Collier, Greg Murray, Fred Schultz, Rey Washam and Kevin Tubb who played only one show (the band's first) because Collier was sick.

The hardcore punk style, a development from the earlier punk sound, arose spontaneously in various cities, but in Austin it was represented by MDC, Big Boys, The Huns, The Skunks and The Dicks. The bands often played together; Big Boys and The Dicks jointly released a split single and an LP, Live At Raul's.

Big Boys shows were legendary, frequently involving food fights, with "Biscuit" frequently sporting a pink ballerina's tutu and pink cowboy boots.Invitations would be made to the audience to come up and sing along, which often occurred. At the end of early shows, the band was famous for yelling, "OK y'all, go start your own band."

Queried about his sexuality by Flipside magazine in 1982, "Biscuit" Turner replied:

"I don't know if I want to answer that or not because it doesn't make any difference if I'm gay or not, I'm a human being and my sexual preference doesn't play into my lifestyle. It comes from my heart and I want people to look at me and say I'm a human being — don't ask me about what 5% of my life is."

There you go there's plenty to read about on Big Boys and I know I've been a bit lazy with my copy and paste lately  but at least i saved you the embarrassment of having web searches for "Big Boys" in your browser history! The great thing about Big Boys is they were unafraid to try different things sure there's a lot of funk already but listen to tracks like "We Got Soul" or "Funk Off" both have a funky brass section and think to yourself how often have i heard a punk band use a brass section!

SO onto your links here I present you with the 3 officially released compilation albums which is their entire discography. First up is "The Skinny Elvis" This covers the early years and includes their "Frat Cars" EP,  Their side of the Split "Live At Rauls" LP (other side was by fellow Texans Dicks) and their debut album "Where's My Towel?/Industry Standard" LP Next up is The Fat Elvis and for me this is the pick of the bunch This contains their classic "Fun,Fun,Fun" 12" "Lullabies To Help The Brain Grow" LP and the bizarrely titled last album "No Matter How Long The Line Is At The Cafeteria There's Always A Seat" This has been the most played of the 3 compilations for me "Apolitical" from "Fun,Fun,Fun" being a particular favourite of mine. Lastly we have "Wreck Collection" a compilation of non album odds n sods, this was originally a 19 track compilation LP but on CD was expanded to a mighty 34 tracks! If you are looking for a good place to start with the crazy world of Big Boys then this is the one! It has some great moments on there such as the aforementioned "We Got Soul" and the brilliant "Red/Green"!

So here you go folks a very brief write up for a huge band. I had these uploaded to mediafire for you for close to 2 years and just never got round to it as how do you describe the Big Boys without wrongly giving people the impression they are just A.N.Other USHC band which they certainly are not! Now I don't have to describe them or did I? anyway you got a full discography here 88 tracks 3 links 320KBPS quality you can go make up your own mind I guarantee you will be either slamming round your room or shaking your booty to the funk or both at the same time!