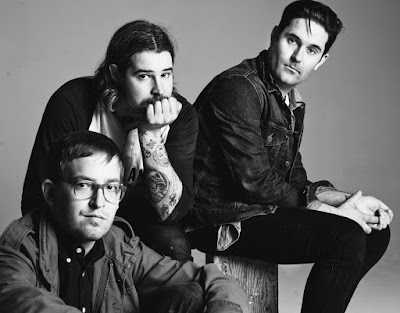 You wouldn't think Sub Pop records would really have that much to offer these days, their heyday I guess is long behind them, save stalwarts Mudhoney who continue to release consistently great records really I don't know much about Sub Pop beyond the early 90's or what they release. Enter METZ a 3 piece Garage/Noise band from Ontario Canada! I had heard a lot of good things about METZ back in 2012 when they released their debut album however I was surprised to find they had a brace of 7" singles and EP's dating back to 2009! I was blown away when I finally got round to listening to these guys here is a band who like to make one HELLAVU racket and i had to wonder how fucking out of touch I am that I had never heard these guys!.

I saw METZ live twice in the space of a few months (They were so good first time I had to go back for a second round) and despite that and owning all the CD's I literally know very little about these guys! In fact I didn't even know what they looked like till I saw them live, I like these guys a lot so I don't know why I didn't look into them more. So as I have been doing of late with the posts here's a bit of blurb about them from the internet. I mean this is pretty weak considering this is from Sub Pop's webpage on them it still doesn't tell you very much but here you go

"METZ, our own widely-adored and delightfully noisy 3-piece punk* band from Toronto (ON, CANADA), have been laying waste to stages around the globe for over 10 years. During that tumultuous chunk of time METZ, comprised of Alex Edkins, Hayden Menzies, and Chris Slorach, have cemented their reputation as one of the planet’s most exhilarating live acts and trusted providers of bombastic outsider rock METZ create uncompromising and challenging music that remains unwavering and has only grown over time."

* I would like to add here "punk" is not really a word i would use to describe METZ that's SUB POP not me! Punk is far too bland a word for these guys!

The rest of the blurb just tries to sell you their music! So onward then... I would have to say that METZ are one of those bands that continue the fine tradition of "Noise Rock" that has seen the torch passed from hardcore to early exponents of the genre like Amphetamine Reptile records and bands Like Jesus Lizard, (Early) Helmet, Shellac, Drive Like Jehu, etc etc etc what's great about METZ though is they really like to push their sound into the red, Drums like Oilcans from the back of a cave, guitar and bass that literally feels like you can touch it they are so loud and in your face. Their attack is 100% aggressive but without sacrificing the tunes and whilst I say tunes don't expect to be whistling any of these dittys as you hoover your house, what I mean is these guys are so forceful in their approach that they completely draw and COMMAND your attention, their songs for all their thrash and full on guitar overdrive are actually memorable, though I would say that a typical listen to METZ will leave you with your eyes reddened and bugging out, your neck muscles aching and the taste of blood in your mouth!

I have no fucking idea what I'm saying here I post a lot of different music and I try my best to bring you variety but I listen to so much music and there's so much to digest these days that whilst a band stands out to me I'm no longer able to trainspot to the same standard as when I first started this blog!!! For me it's about the sound of a band more than individual songs and information these days and METZ sound just destroys me in the best way music can destroy anyone,What I will remind you of is what I have always held true here. that. NOTHING get's posted on this blog that isn't music I truly love if it's passable or just OK or good it does not make the cut . So take my word for it if I tell you METZ will rip your head off your shoulders and you'll be happy about it you can trust me they are THAT fuckin' good!

Here below you will find links to all 3 of their albums plus last years "Automat" comp which nearly rounded up all their previously mentioned 7" tracks however there were a couple missing which i sourced and added to the comp along with the "M.E." EP containing 3 cover versions that was originally released on a bonus 7" with the limited first edition "Automat" LP but I downloaded the digital version and stuck it in with the "automat" link. The 7" featuring covers by Urinals, Sparklehorse and Gary Numan it's a pretty interesting listen! I don't see the point in going into the sound of each album here, METZ are a consistent band that's another thing going for them you pick up the new METZ you know it's gonna be exactly what you expect no jazz funk or pop hooks, no frills just straight up what you want from them not that they have not progressed but every album has those cavernous drums and in your face guitars and the songwriting just gets better and better!

So that's about it in a world of fairly weak guitar bands that leave me longing for the 80's and 90's and a new Shellac album Metz were exactly the tonic I needed Loud in your face and kicking me around the room just like the good ol' days go check em out I can guarantee your satisfaction!