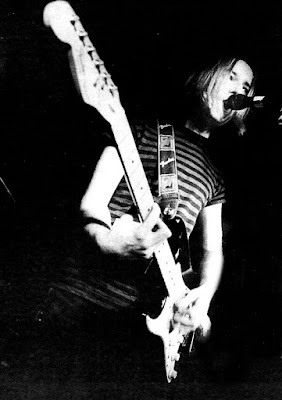 I discovered these guys by pure chance I was listening to a podcast thing with Laura Pleasants (Ex - Kylesa/The Discussion) and she selected 10 tracks that had influenced her current band. I got a few good bands from that podcast, Modern Art was one of them I liked it a lot but by the time I got to the end of the podcast I had forgotten the name of the band and had to listen to the first part a second time I am SO glad I did read on.....

Modern Art began in 1980 with Gary Ramon playing all instruments recruiting other musicians as he needed them, releasing only cassette albums between 1980 and 1990 on his own Colour Disc label ( he also released other artists you can check out the discography of the label HERE) However recently his first 2 albums were reissued on CD and that's how I manged to hear them.Having managed to release 19 albums and quite a few retrospective/compilation albums he has a pretty BIG discography and only 3 albums are available on CD.

It's hard to describe the music of Modern Art it's good quality but has a kinda  lo-fi/bedroom recorded feel to it, for example over the course of listening to this band I have heard songs that sound electronic in nature, some Kraftwerk sounding things, tracks that sound like Meat Puppets circa "II" , Mission of Burma along with a lot of psychedelic touches and even some stuff that reminds me of the very first Big Black EP "Lungs" and a little Krautrock! Modern Art seem to come up with music that for an obscurity peddler like me is an absolute goldmine. I had no idea about this band and I know no one else who does which is great because I get to share them with people! I quite like Gary Ramon's vocal style as well think of an alternative/slacker Lou Reed I guess or something along those lines! The one thing I can say is the music is all infinitely listenable for me hitting play on Modern Art is a bit of a risk because I know there's a good chance every time I reach to change it another song will come on and I will think OOOOH yeah I rem this one this it's great!

This is not a discography, it's a selection, it would be near impossible to do a discography as most of his releases being on cassette and anywhere between 30 & 40 years old now you have to rely on other music users being able to rip cassettes and in fact being bothered to do so I mean do YOU have any cassettes from 30 or 40 years ago? I know I don't! So what I have given you here is a selection of everything I could source using Bandcamp, Buying CD's along with vinyl and cassette rips sourced from peer to peer sites. I can assure you these are all of the best quality available as I actually had to delete a couple of things I downloaded because of poor quality this is the best of what I could get my hands on so here's a short guide to what you get...

OK firstly Gary Ramon in both his Modern Art & Sun Dial guises often records multiple versions of his songs and sometimes different albums with the same name so you may find some repeats here normally when it comes to compilation releases I delete anything that's taken from an album I already have but in this case I have left everything intact  because it is impossible with different songs having the same titles and multiple versions of the same song (yet always very slightly different from each other) it's damn near impossible, so be prepared for the odd repeat!

Pastel Sunrise - (There are 2 versions of this, one is a single cassette the other is a box containing 3 x 4 track cassette EP's the track lists are slightly different but contain mostly the same tracks this is the single cassette version from 1985)

You have to understand that this guy never seems to stand still his work is varied but consistently sounds like him for example the release Pastel Sunrise is almost entirely instrumental and acoustic other releases veer more to the psychedelic some to to the lo-fi style I described originally. My personal recommendation is to start with "Underwater Kites" his debut if you like that keep going there's plenty here to go through or download the "Sonic Dimensions" Comp for a really good taster of everything.I love coming across obscure little gems like this I have absolutely fallen in love with the work of Gary Ramon both as Modern Art & Sun Dial I really think you will too.

In 1990 Modern Art had gone from being Gary Ramon to pretty much a functioning band and began leaning more and more towards psychedelic rock it was at this point Modern Art became Sun Dial the lo fi electronics/lo fi style were completely stripped for a louder brasher guitar based sound. As this post is getting a bit long here's what discogs says...

"Sun Dial is the vehicle of guitarist and singer Gary Ramon, who started recording in the eighties as Modern Art. He changed the name to Sun Dial when forming his live band. As Ramon’s cohorts came and went, Sun Dial’s style changed, yet it remained rooted in late sixties psychedelia and often focused on the guitar work. Many of the band’s indie label releases came as collectable limited editions and were re-released over the years; they also recorded and released multiple version of several songs"

As with Modern Art it would seem Gary Ramon was never satisfied with a song so again within your links there will be different versions of songs but these were mainly on the expanded reissues I present here but I enjoyed them!

Sun Dial were an even bigger shock to me than Modern Art I absolutely love psychedelic music the more sixties leaning the better and Sun Dial fall into that category for sure! I can't understand (and this goes for Modern Art as well) why this guys work languishes in collector obscurity because it's completely outstanding! After getting over Modern Art I decided to see what the members were up to now and came across Sun Dial so I downloaded the 2 disc deluxe edition of their debut album "Other Way Out" I hit play and I was utterly gobsmacked the music just leapt out of the speakers at me! Let me tell you something personal here, I have often been told I display some behaviours of ADHD , obsessive,fidgety, short attention span etc so the chances of me listening to a whole album even a regular length one is rare so If I tell you that on FIRST listen I hit play on "Other Way Out" and sat through it's entire 2 hrs 20 minutes without wanting to skip a single track or change the music and that every track grabbed my attention then you should take that as one SERIOUS guarantee of quality! Add to that the fact that the expanded 2 disc editions of the albums are deleted and rare I spent close to £70 ($83/76 Euro) on them within a week of hearing them! YEAH they are that fucking GOOD!

Sun Dial veer from mellow indie/psychedelia something along the lines of the very best of Spiritualized to full on loud guitar freakouts that scream of the loudest and heaviest of Hendrix and The Stooges all with their own touches! Sun Dial are one of the most entertaining bands I have ever listened to each song builds on the last creating a dynamic that swells up and mellows out and swells up again has catchy tunes and vocal lines and sticks in your brain like pins! I have played these to a few people as I do when I discover something I am enthused about and I have had 100% the same reaction that I did to this band that is "HOW HAVE I NEVER HEARD OF THESE!!!????"

So there are only 3 albums here by Sun Dial, reason being that after the initial 3 albums and a brace of EP's between 1990 & 1993 Sun Dial singed to Beggars Banquet and from what I have read they then began to change their sound a great deal taking away a lot of the the psychedelia for strains of hard rock and metal to the point that in fact their debut album for Beggars Banquet " Libertine" was apparently so bad that 15 years later it was taken back to the studio remixed, remastered and given a complete overhaul to make it sound more like Sun Dial I bought both of these to dip my toe in and to be honest the redone version is MUCH better but nowhere near the quality of the recordings I present here. The original 1993 version is terrible. The other reason being that he was very prolific beyond the albums I present here he released a further 15 albums 2 of those being 13 CD box sets! So for now i will continue to digest the ones I have if I get more I will expand the post!

"Other Way Out" - (2 Disc Expanded & Remastered edition contains The album, the "Exploding In Your Mind" EP, some outtakes and B-sides plus a further bonus disc "Other Way In" which contains 7 tracks from the original session that didn't go on the album plus 7 alternate versions/takes of the album tracks)

"Reflector" -  (2 Disc Expanded Remastered Edition) (Firstly the incorrect spelling of "Reflecter" is theirs not mine! This expanded edition of their actual 2nd album contains the Full album plus the "Fazer" EP and a whopping 19 bonus tracks/unreleased/Live and alternate takes)


So there you go a selection of some of the best material released by Gary Ramon under his 2 main aliases! This is some of the best music i have discovered in the interim since last blogging and I can't tell you enough to check this GREAT underappreciated music out!

LIVING IN THE DISTORTION PARADE - Mediafire

OTHER WAY OUT (DELUXE EDITION) - Mediafire