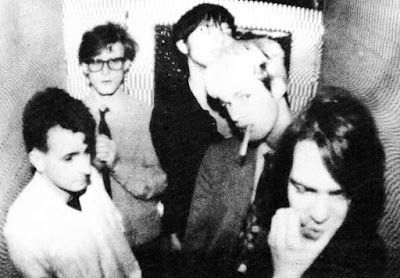 Walkingseeds are a band I was introduced to because I was lucky enough to have a mate who liked to confound you with great obscurities, he copied me some Walkingseeds bits and I was blown away by the sound of this unusual band. Here was a band from the UK who were making some grungy guitar noise that was easily the equal of all the US bands doing the same style that we worship so much! At the time I was still buying vinyl and their records were damn hard to come by! I would never have considered checking out a band called Walkingseeds sounds too much like country music I couldn't have been more wrong!

Hailing from Liverpool and existing from 1985 to 1994 they put out 3 LP's a load of EP's & Singles and did 4 John Peel Sessions yet for some reason they have never had any kind of reissue treatment you can lay your hands on their records and CD's some will cost you more than others but they are all from their original release no fancy new updated package for these guys! No one really seems to be that bothered about this great band so I decided a post was in order to rectify that.

First off as with most of my posts these days before we get to my waffle here is someone else's....

"Alternative heavy rock band from Liverpool, England. Their sound has been described as 'psychedelic grunge'.

Formed in 1986 from members of The Mel-O-Tones, Frank Martin (vocals), Bob Parker (guitar), and John Neesam (drums). With Neesam's departure they were soon joined by former The Marshmallow Overcoat guitarist Baz Sutton and drummer Tony Mogan.

The distinctive style includes Frank Martin's throaty and anguished vocals which are mostly barked or screamed, fuzzy overdriven guitar embarking on wailing psychedelic solos and heavy pounding drums. They may be explained in some ways as a British Butthole Surfers, although they do not sound too similar and the music lacks the absurdist elements of the Buttholes'.
It is rumoured that Seattle bands around the Sub Pop scene such as Nirvana were heavily influenced by Walkingseeds sound, however there is no conclusive proof of this.
In their later years they were joined by Don Fleming"

I have been a fan of this band for decades but it took me a long time to gather stuff by them and what I present here is not quite a discography as the "Earth Is Hell" Live LP is missing and I can't seem to source MP3's of their debut 12" "Know Too Much" well at least not one that doesn't have some kind of corruption and their 2 John Peel Sessions from 1989 & 1990 have eluded me thus far . However I have done my best to source the best quality versions as obviously I wanted these guys music in good quality for myself so here's a guide to your links....

"Skullfuck" their debut album comes with 2 bonus tracks not on the vinyl version. Of their 3 albums this is their by far the most distorted twisted and noisy I suggest standing back from the stereo a bit before hitting play on this one so you don't get bitten!

"Bad Orb..." their 3rd album carries on in the same vein as it predecessor and contains my favourite song "Broken Cup" if it's grungy repetitive riff and chorus doesn't earworm you I would get your hearing looked at! This is the US Shimmy Disc version that has 3 more tracks than the UK CD version.plus I added one more bonus track of their cover of Pink Floyd's "Astronomy Domine" from the B-side of their "Gates Of Freedom" 7"

Dwarf Mini LP was a vinyl only release and contains 5 tracks somewhere between the sound of Skullfuck and the later 2 albums the Track "Can't Seem To Figure It Out" is another classic!

EP's This file contains all of their 12"s and EP's aside from "Know Too Much" which I explained before, so what you get is their side of the Split 7" on Clawfist with fellow psych maniac Bevis Frond and sees them covering one of Bevis Frond's tracks.."Marque Chapman" 12" , "Shaved Beatnik" 12" "Mirrorshades" CDEP (Contains the "Mirrorshades" 7" + 3 bonus tracks)  & "Rolling Machine" 7"

Peel Sessions  And last but not least we come to the jewel in this post. I have managed to source a very good quality copy of both their Sessions from 1987 I was surprised at the quality of these they are not exactly pristine digital but then again they are a fairly noisy band especially back in 1987! But they are definitely better than you'd expect for a 33 year never officially released  recording.

So there you go a very comprehensive look at nearly everything this great band ever done I fear repeating myself here but I don't understand why no one has ever reissued these guys back catalogue it would seem that maybe the band don't really want to see it done or maybe mastertapes don't exist I know one of them went on to join the once huge Liverpool indie giants the La's but other than that I can't think of why this band languish in obscurity! Here's hoping I can now introduce a few more people to them with this post