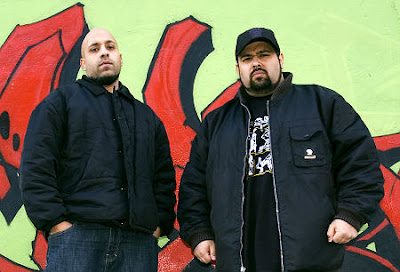 Dälek (pronounced dialec) are a hip hop outfit I came across by pure chance, During 2007 & 2008 I had a massive phase of listening to a lot of what is known as "Concious" Hip Hop basically underground, mostly unknown artists (mostly white), with more to say than the usual "bling & bitchez" type nonsense (A misogynist, sexist and neanderthal approach that I have no time for FUCK that) that were basically mining their own particular vein of hip hop. Most of the things I was listening to at that time were centred round or affiliated with Anticon & Definitive Jux records however Dälek had nothing to do with either of those and are definitely out there on their own with their style! So before i start my blurb I'm gonna continue being a little lazy and give you some history from discogs.com the fountain of all trainspotter knowledge

"A hip hop outfit from Newark, New Jersey, founded in 1998. Will Brooks (a.k.a. MC Dälek) was responsible for lyrics, Alap Momin (a.k.a. The Oktopus) was the producer Hsi-Chang Linaka (a.k.a. Still) used to handle turntables, but left Dälek in summer 2005.For a band so steeped in noise and bombast, Dälek ended quietly, going on hiatus in 2011 without even an official statement. Brooks stresses that there was no beef between he and Momin, just a project that had run its course. Momin moved to Berlin and focused on electronic projects, while Brooks made slightly more traditional rap as iconAclass. Performing classic Dälek tracks live gave Brooks the urge to revive Dälek, and with Okto’s blessing he assembled a new lineup in the spring of 2015 with co-producer Mikey Manteca (Destructo Swarmbots) and DJ rEk."

That should give you a brief overview of the band it would appear that the main core of the band as pictured above is Will Brooks (aka MC Dälek (Left) & Alap Momin (a.k.a. The Oktopus (Right) So I don't know a great deal about this band what I do know is that I love their unique sound so let's go with that!

Dälek combine a lot of elements into their dense sound the early albums "From Filthy Tongues.." & "Absence" mix variations of huge beats pushed up to 11 combined with industrial scrapes and washes of abstract sound that wouldn't be out of place on an early Einstürzende Neubauten album!!! Combine this with some nifty turntablism and lyrics delivered with sincerity and urgency with an interesting style of wordplay based in the social/political spectrum and that about sums up the sound early on, However take a listen to something like the epic "Images of .44 casings" on their debut mini LP "Negro, Necro, Nekros" and when the beat kicks in it absolutely floors you, in the same way the huge beats on those early DJ Shadow records did (A technique they would use again to devastating effect on the Deadverse Remix of Techno Animal's "Homicide" see EP's blurb below)  and will put your speakers through their paces. Also on "Ever Somber" from "Absence" they weave the sound collages in a way that makes the backing track sound like a remix of something from My Bloody Valentine's "Loveless" album! Shoegaze hop anyone? This is basically the essence of  Dälek they use sounds and beats in a way no other hip hop artist does and is precisely why, whilst much of the hip hop I discovered during my "phase" has fell by the wayside Dälek endured and remain a firm favourite, I continue to follow them and why I decided that they deserved a place in the blog!

Beyond the first 2 albums the Industrial sounds start to lessen or are at least made less harsh and by the time of "Abandoned language" the sound has been tempered with more contemporary elements and is far easier on the ears! There are actually some truly beautiful moments that just stop you in your tracks and leave you just astounded, "Isolated Stare" from "Abandonded Language"  for example with it's soaring strings and off kilter distorted brass which combine to make a sound that just melts you into your seat! As I said it's hard to define Dälek I listened to a lot of hip hop over the years from the early days of Public Enemy & gangsta rap in the 80's The 90's weed influenced artists like Cypress Hill, Ice Cube and House Of Pain in the 90's, Dr Dre, Snoop Dogg & Eminem's world domination in the early 2000's to the contemporary underground artists I talked about at the beginning, I am NO hip hop aficionado but would consider myself well versed in Hip Hop and I have never heard anything like Dalek! Their sense of experimentation and use of sounds beyond the norm of what is normal hip hop fare (you're unlikely to find an Amen break or a James brown Horn solo in amongst ANY of these guys work) is what keeps me returning to them and I hope you will too! I feel I want to say that while I may make Dälek sound like some sort of unholy experimental mess it's exactly their ability to draw their elements together into a cohesive sound that whilst occasionally challenging, overall they do make some just simply fantastic and original hip hop and I have found myself often sitting back listening to these guys and nodding my head with a huge grin on my face! These guys may challenge in places but exactly that element that makes them so compelling, with hip hop being probably the most influential style of music ever created on the planet infiltrating almost every aspect of music from punk and metal to contemporary dance and urban sounds to come up with sounds that actually are both contemporary and experimental that also draw the listener in and remains cohesive and ultimately listenable is something the majority of the biggest selling and best known artists in the field fail to do miserably!

Griots & Gods - This is a live collaboration with Swiss  Industrial legends Young Gods recorded in 2010 at the Les Eurockéennes Festival de Belfort it is basically what you imagine it is a live  combination of the sounds of both bands and is a very interesting listen!

EP's  - This contains the non album EP's these have been either taken from downloads (high quality paid) and from my own CD collection This contains the "Street's All Amped" 12" "Respect To The Authors" 12" Their split with Techno Animal and the 1 track 40+ min "Untitled" EP released on Southern records experimental Latitudes offshoot.

Deadverse Massive Vol 1 (Redux) - OK if you follow this blog you will know I am an obsessive so when i started looking at Dälek's discography after I bought this compilation of EP's and remixes I realised that there was quite a few things missing from it and other things that had come out since it's release so I stripped some of the stuff out (Streets all Amped 12" and Techno Animal/ Dälek split see EP's above) and rebuilt the comp in near as possible chronological order with the missing bits and pieces inserted! So this version is completely different to the released version and is unique to me and this blog! The material from this was taken from various sources including the original comp, downloads and vinyl rips but it's all presented in 320KBPS and is as good quality as is possible!

OK so that's Dälek dealt with so onto the bottom set of links Deadverse Massive now this may get confusing here but bear with me as well as doing Dälek, members are also involved in a collective group called Deadverse Massive which is also a name often used for Dälek remixes.To date there have only been 2 releases under the Deadverse Massive name exclusively, these are the album "TakeOver" which is basically a collaborative effort which is overseen, produced and mixed  by Will Brooks of Dälek featuring a plethora of MC's and artists collaborating on the tracks it gets more confusing now, there is also a Deadverse Massive 12" pic Disc this is released under the artist names of Dälek / Destructo Swarmbots / Oddateee but the record is called "Deadverse Massive" and features 4 tracks none of which are credited to in individual artists! To be honest with you it's really all irrelevant, what you get is an album and EP's worth of some great underground hip hop that whilst featuring members of Dälek  has a more contemporary feel to it there's none of the Shoegazey/Industrial Scrape experimentation whilst this is still most definitely underground hip hop and you are unlikely to hear this music blasting out from boy racer cars any time soon it is definitely way more straight ahead than Dälek whilst still having it's feet firmly planted in the conscious/underground camp there is a lot of use of the N-Word, bass and beats and more what you would expect from more well know hip hop but it's still an interesting listen and I added it here as it's related to the Dälek camp and is a good counterpoint to Dälek's madness!

So that's that, here's your links go nuts, I don't often post much Hip Hop and I don't really intend on posting more but you never know, I'd like to think that in the company of the other music I have posted over the years of varying genres that you will understand that these guys are head and shoulders above anything else in the genre, at least in  my opinion and that's why i am drawing your attention to this! I can imagine that this is the kind of Hip Hop that would appeal to readers of this blog and is definitely something more cerebral than fucking Kanye West!